The Grant DNA project lists me as Group A (Chiefly), Subgroup 3: R-P312>DF19>DF88>Z17274+ (Tullochgorm and branches of that tree). That would make most if not all of Charles McKinnis male line also match this group.

On the Grant page Names Associated with Grants they list MacInnes as being north (Glenurquhart) and east (Duthil) of Bona and Inverness. Inverallan is where the Grants of Tullochgorm are from, so this supports that Charles could be from around Bona.

McInnes, McAngus, Innes, de Innes, Makenis, McAngus, Angus, McInnes Veig, M’Innes, M’Innish, McKinnes, Inness – (Patronymic and surname derived from the Gaelic MacAonghuis, meaning son of Angus or Aeneas) – The name was noted in Glenurquhart and Duthil in the 16th century, and in Cromdale, Abernethy, Inverallan and Aberlour throughout the 18th century.

On the web page Branch Families of Grants, they list the following. Inverallan area is shown below.

The earliest known representative of this family was Patrick Grant in Tullochgorm, circa 1530. Descendants of the family were prominent members of the Clan Grant and later distinguished themselves as military officers in the far reaches of the British Empire.
The most notable of these was Field Marshal Sir Patrick Grant, GCB, GCMG (1804-1895). His son, Lt. Gen. Sir Henry Fane Grant, GCB, GCVO (1848-1919), commanded the 5th Division of the British Army during World War I. The eminent historian, authoress and antiquarian, Isabel Frances Grant, MBE, LLD (1887-1983), was also a descendant of the Grants of Tullochgorm. Many Grants received their first exposure to the history of the clan by reading Dr. Grant’s small book, The Clan Grant, published in 1955.
Unlike other branch families, the Grants of Tullochgorm did not have a significant network of cadet families, although traditional accounts suggest that the Grants of Glenlochy in Strathavon were descended from the house of Tullochgorm in the early 17th century.
The most recent chieftain of the Grants of Tullochgorm was the late Lt. Col. Donald John Arthur Grant, who died at his home at Inverbrough, Tomatin, in September 2014. Colonel Grant is survived by a son, Patrick, who earned a masters degree in computer science from Edinburgh University and works in information technology for Morgan Stanley in London. 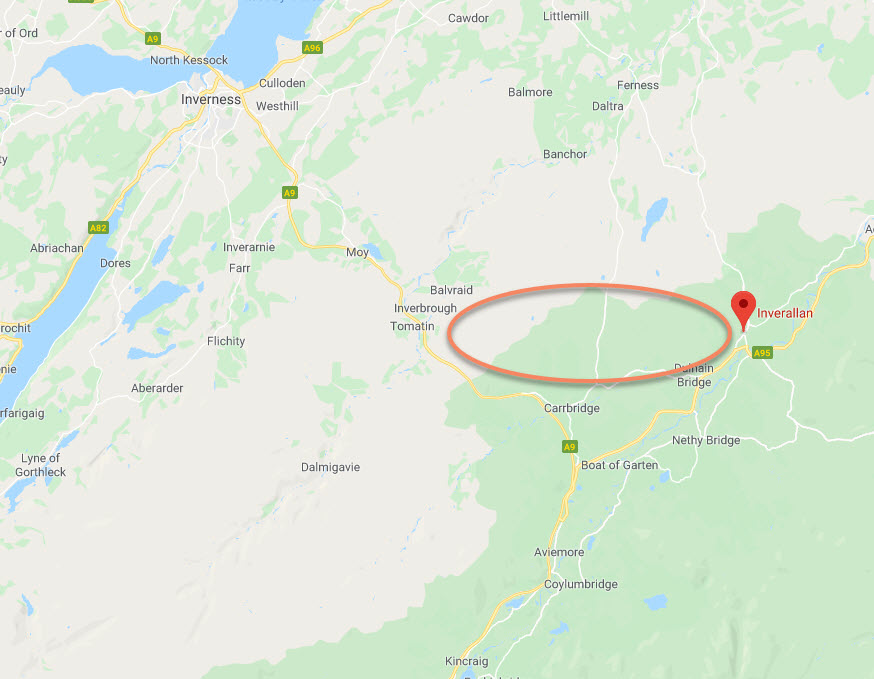 The Inverallan area for Grants is roughly from Tomatin to Inverallan, and is about 20-40 miles from Bona (map courtesey Google map).