This information is taken from https://www.electricscotland.com/history/records/genealogicalcollections1.pdf pages 180 - 182.  English excerps are shown below.

In this document is the chiefly lineage of MacKintosh. We do not follow the MacKintosh chiefs line, but the intermixing of  mac Innish is mentioned.  The ninth Laird of MacKintosh 1) Ferquhard had a wife Egidia of Innes.  They had three sons Duncan, Malcolm and Ferquard and many daughters. One of the daughters, Isabella, married a Duncan Mackynich vic Ewen (commonly designed Parson whatever that means, and had a son Bean Macpherson,from whom the family of Brin took rise.

2) Duncan had John and 3) Ferquhard  then had four more sons Roderick, John, Eneas and Donald with another wife

I beleive that this Eneas had two sons Thomas and Hugh.  But Thomas was known as mac Innish, or later as Thomas Angus.  His brother Hugh was in Inverness, and had a son Hugh mac Angus.  It is noted that the town of Burntisland, along the firth of Forth, had many Angus.  So here is a possible connection to where the name MacInnes came from.  Not sure it was from this line, but a Grant may have been orphaned and picked up by someone with a mac Innes last name.

The tree is given here.  The dates are guesses from Ferquhard


So Thomas MacInnish introduces the concepts of MacInnes families in the area about 1500. This matches the time line of the DNA matches. Thomas may not be in our family, but it does point to the name MacInnes being viable. Phonetically MacInnish, MacInnes McKinnis all sound the same.

The Genelogical Connections was written in Latin, and translated. The pages have Latin at the top and the translation at the bottom. 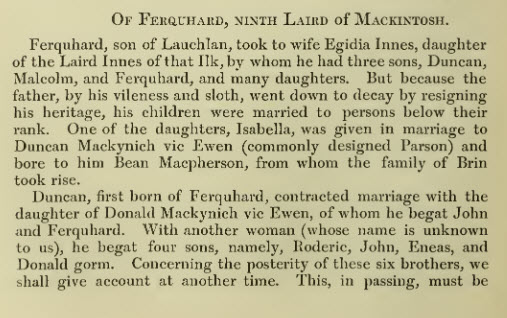 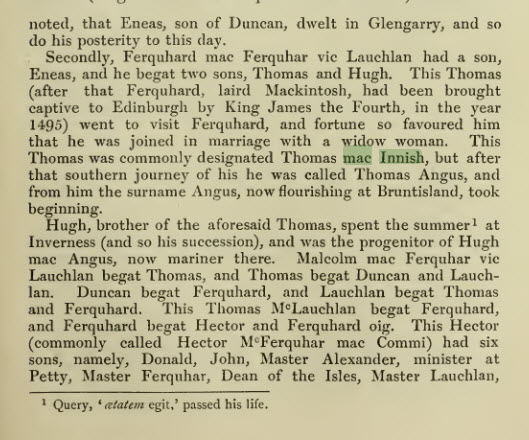