The 1914 Lineage book claims Charles was a Grenadier in the British ground troupes under General Edward Braddock, known as the Coldstream Regiment of Foot Guards. Braddock was at Culloden, and had permission to recruit troupes (also know as "impressed" or forced into service). Prince William, Duke of Cumberland, had given Braddock the command of the America's troupes, the 48th and 44th regiments, and was sent to put down the advancement of the French into the new settlement. France was working with the local native Indians, and the skirmish gained the name the French-India war, or seven years war. The French-Indian war actually started in 1756 after Braddock's default.

General Braddock was in Culloden, and had permission at that time to get more people. Charles was a Grenadier which is a special forces type of team. They were usually the first to go into battle and throw their grenades.  Often they were not in any regiment but assigned as needed.  This makes it especially hard to track them.

From "Scottish Field":
"Additionally, the 1747 Act of Proscription was also an attempt by the Hanoverian government to weaken the clan system of society across the Highlands. The Act banned the wearing of tartan and Highland dress, except by the army. So, if a Highlander wanted to wear a kilt in the years immediately after Culloden, he would have to join the British Army to do so."

If Charles were from the barony of Bona, this is just 12 miles from Culloden. He may have been recruited at that time or eariler.

So it is possible that Charles was impressed during this period, or could have been at Culloden although unlikely.

Braddock was commission to go to the United States and take his army from Alexandria Virgina up to the area where the French and Indian peoples were causing issues. He left in Jan 1755 from Cork Ireland and had three regiments according to the book In search of the Forlorn Hope.

I need to find the source of these numbers. The Grenadiers only show 60, and both Halkett and Dunbar were said to have battalions. In "Braddock's March"2 Braddock talks about getting more Grenadiers: " I have also made a Regulation which I think will be of great Advantage in posting every Officer in time of Service to his own Company and ordering the oldest Battalion Company to act as a Second Grenadier Company upon the left ..." So there were two senior Grenadier battalions, both under Caption Gage's command.

The 44th was formed in 1740 to augment the War of the Austrian Succession. This unit was first called the 55th and was raised by Col James Long of the 1st Foot Guards also called the Grenadier Guards (Extracted from "The Essex Regiment (1st Battelion)" by J.W. Burrows).

The 78th Fraser Higlanders from Moray Scotland - not much is mentioned about this regiment. I am not sure they were really in this battle as most sites say they started in 1757.

George Washington was a key aide to Braddock and basically led the Virginia and Maryland militia. Also in the militia was Daniel Boone and Daniel Morgan.

Braddock built a road from Alexandria VA up to Fort Duquesne. This was to haul the heavy cannons and also has a road to service the area. He thought he would be in the area a while after he initially stabilized it.

One July 9, 1755, Braddock drove his two regiments across the Monongahela river, and was attached by the French, Canadian and Indians. Braddock used classic British techniques, marching the men in a line in a uniform fashion. But the French-Indians used a "guerrilla" attack in which they would hide behind rocks and trees, then come out and fire. The British was not used to this and became confused and disoriented and fired randomly and chaotically. The Grenadiers were the first to come in, and were getting mowed down.

George Washington finally broke ranks and began to attack in a similar fashion. But the damage was done, soon they began to retreat. But many were left dead or wounded on the field. Of the 100 Grenadiers, only 11 remained and many of those wounded including Charles, shot in the side and thigh. Luckily he could retreat, as the Indians then began to scalp and kill anyone left. The French and Indians found Braddock's stash of rum, and this stopped the advancement.

Braddock was shot in the left arm and lung. One account says this was friendly fire, done by a soldier who's brother was killed by Braddock for not advancing. Braddock lived in agony for 4 days, dying on July 13, 1755. He as buried in the middle of his road, and the troupes and wagons were sent over to hide it from the Indians who would have scalped him. Peter Halkett was killed along with his youngest son. Daniel Boone also then retreated to Pennsylvania as the battle fell apart. 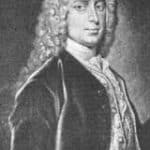 "Colonel Sir Peter Halkett Colonel Sir Peter Halkett Colonel Sir Peter Halkett fought in the French and Indian War in the British 'Colonies' in the U.S. this was known as the "French and Indian War". In the U.K, it was the "Seven Years War" . Sir Peter was shot and killed during the Battle of Duquesne (also known as Braddock's Defeat) on July 9, 1755, near what is now called Pittsburgh, PA. His son, Lt. James Halkett, saw his father get shot and ran to his aid, when he was also shot and died, alongside his father. Also of interest, there was a young Lt. Col. on Sir Peter's staff who is somewhat familiar to us... his name was George Washington. (Needless to say, Lt. Col. Washington survived the battle). Two years after "Braddock's Defeat", another of Sir Peter's sons, Major Francis Halket went with a detachment to provide proper burials for their fallen countrymen. A now-friendly Indian told of two British officers being felled at the foot of an unusual looking tree and was able to locate the tree. It was there that Major Francis Halkett was able to identify the remains of his father and brother, and was able to give them a proper Scottish burial with Tartan and Pipes."

It is likely that Charles knew George Washington, depending on his injuries. In "Braddock's March" - "Washington and the remnants of the two Grenadier companies marched through the night toward Dunbar's camp"3.

For his fighting in this battle and courage shown, it is possible that Charles received a "PATENT" of land near Halifax, Nova Scotia. Whether he actually had this land and traded for land in Pennsylvania will not be known. Elizabeth Appel's document says that the Pennsylvania land was all purchased. Records before 1769 were not often kept. The document above by Bill Smith details property known in Pennsylvania.

In 2009 I was able to go to the The National Archives in London. Here I was able to find the document on the ship that sailed to North America. It has Braddock's, Halkett's and Dunbar's name in it. It appears to be some kind of an audit, and did describe some of the men but did not have a muster for all the men. It is dated 8 January 1755 but has dates 3 Feb and 17 Feb 1755 on other documents. Braddock supposedly left out of Cork Ireland in Jan 1755.

The document, I was actually allowed to get this and touch it. 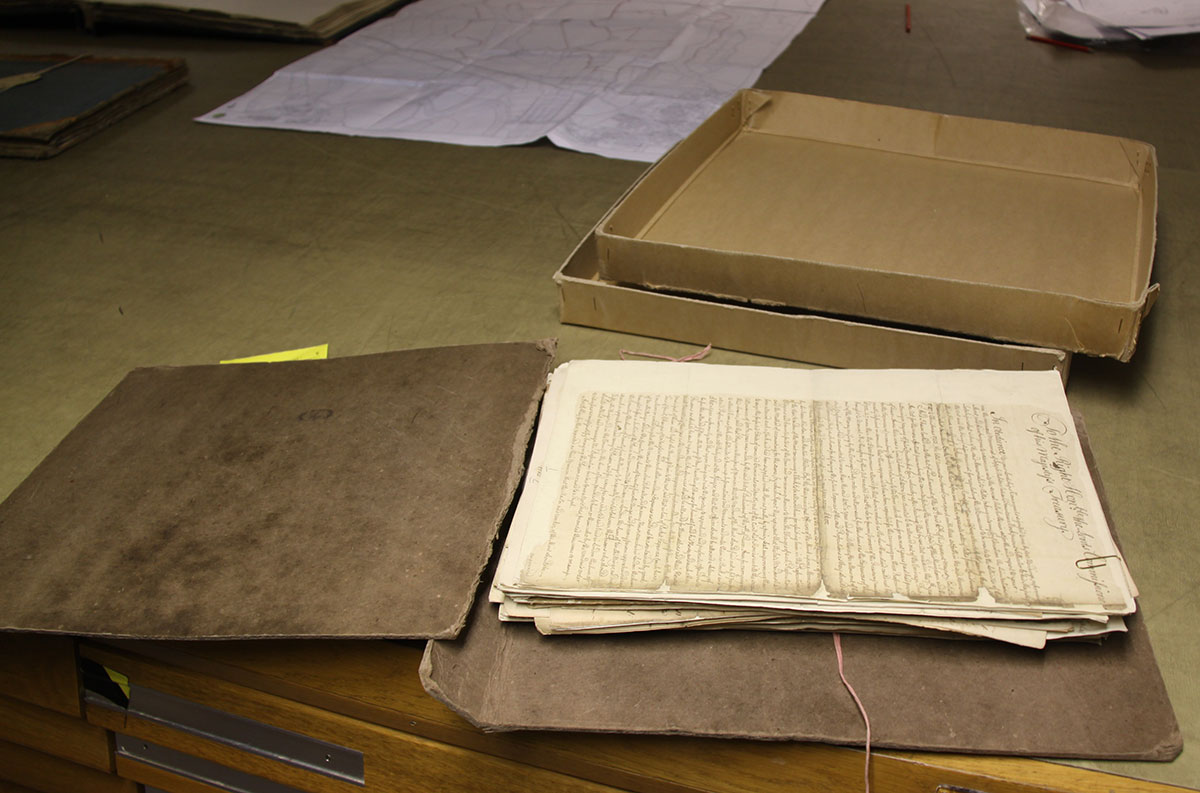 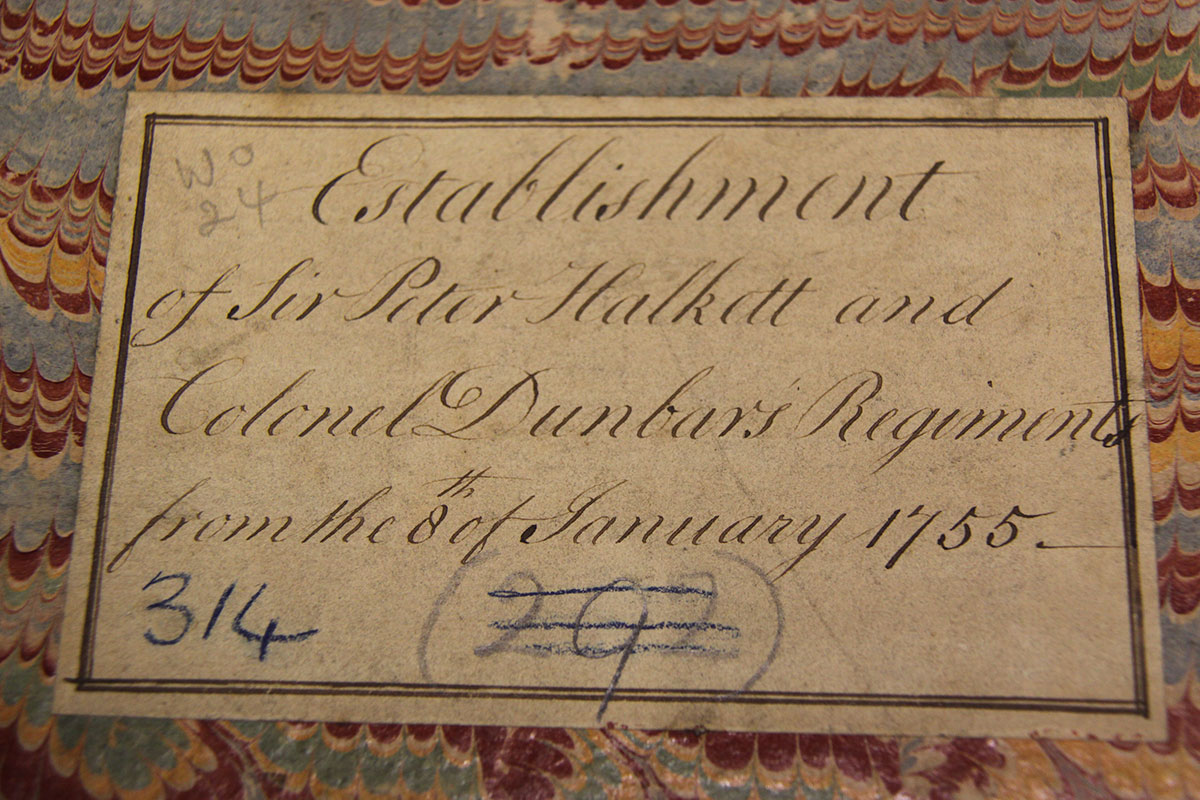 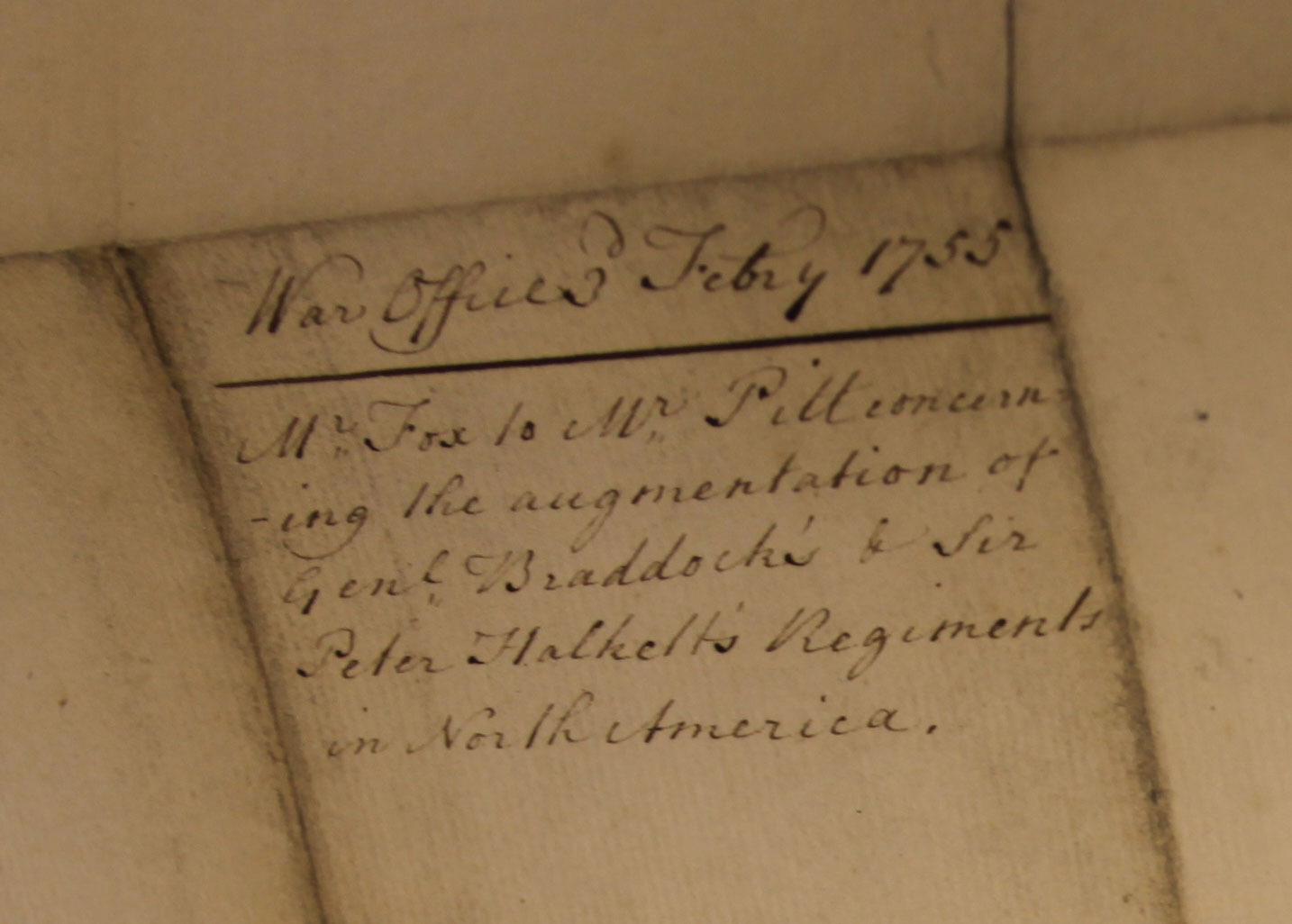 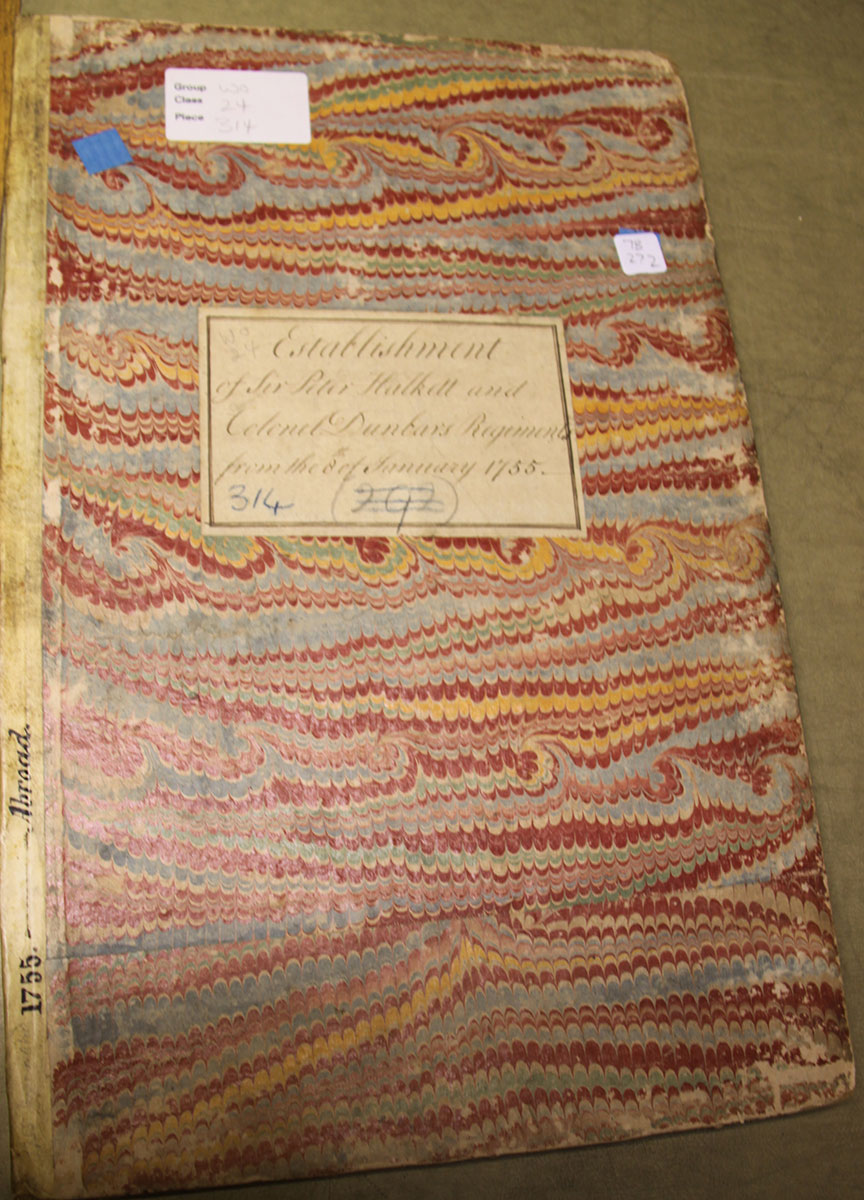 A muster but only officers 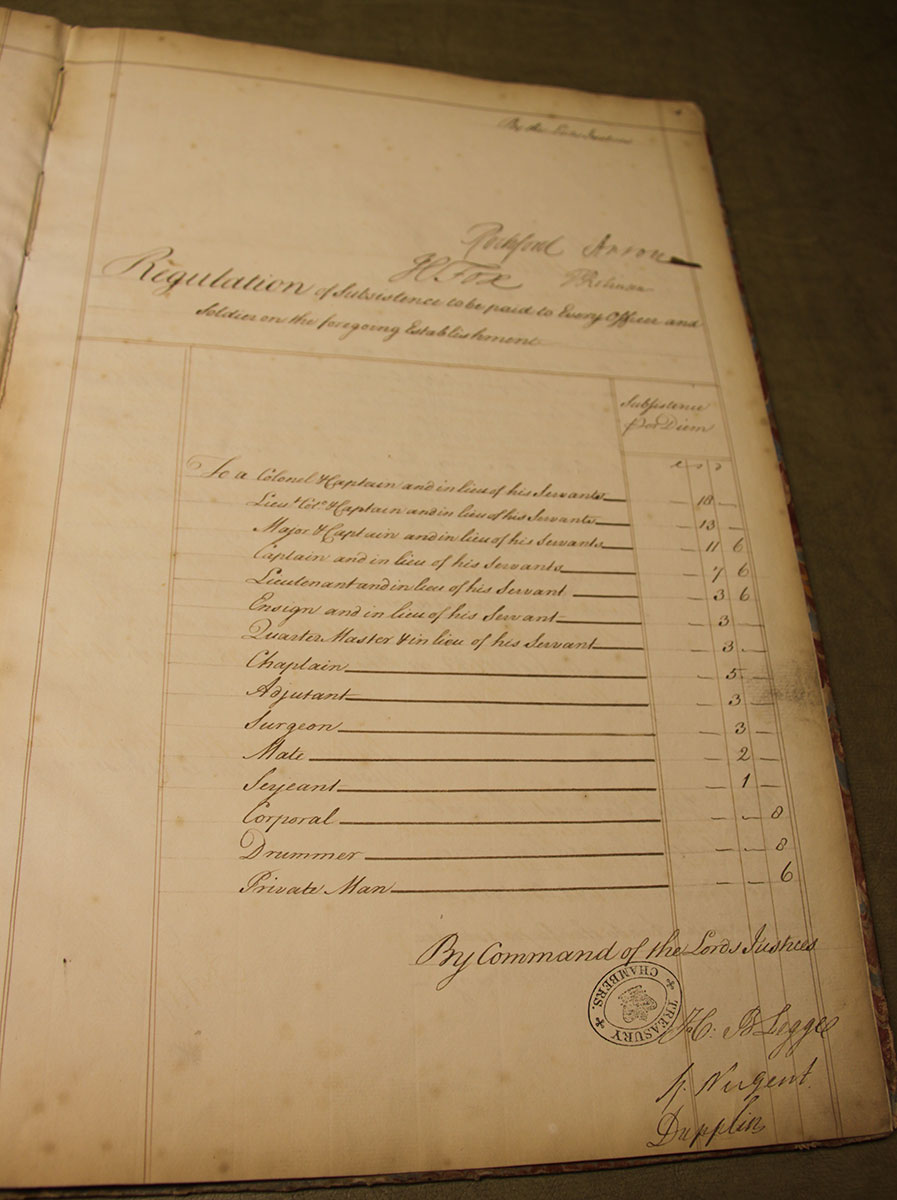 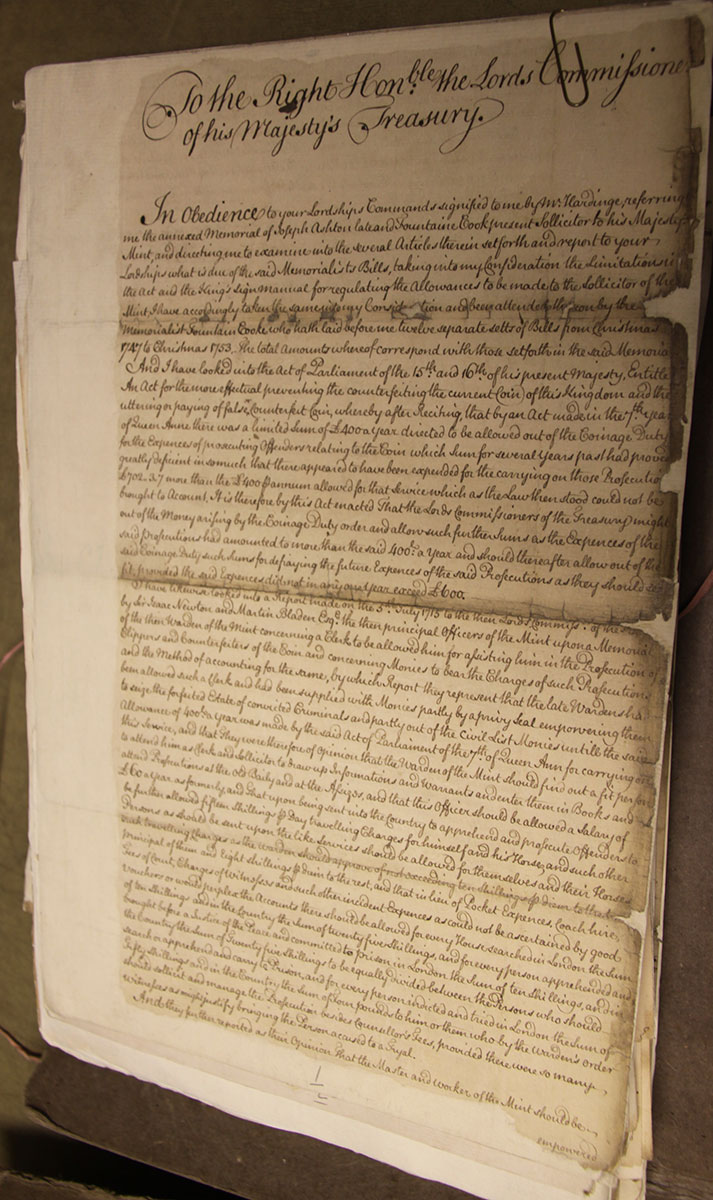